“A True Rallying Point”: A New Neighbourhood Centre in Sudbury

In early November 2020, through support from the region, the friends in Sudbury were able to lease a neighbourhood centre, at the exact midpoint between the Flour Mill and Louis Street focus neighbourhoods, just a kilometer apart. Having their own space became a necessity after the summer and fall cycles of intense activity when, despite the challenges of the pandemic, the program was able to grow to six groups through the efforts of neighbourhood youth, who were also inviting their friends into study circles and devotional gatherings.

The centre is 2000 square feet in an old school building with a large gathering space, two offices, and a simple kitchen. The friends were overjoyed to receive the keys to the centre on the first day the Louis Street Junior Youth group met. Now, rather than meeting only once a week, having their own space allows junior youth groups to meet three days a week, or even more frequently during expansion phases. Sudbury’s junior youth coordinator described:

“There is flexibility in meeting the needs of the schedules of families in the neighbourhoods…they can meet for as often and as long as needed, responding to immediate needs that arise. Youth and junior youth have also consulted about the need of a homework club for the junior youth. They can now see this as a real possibility since they have a space.  More complex social action initiatives seem more attainable.”

“We saw them as spiritual giants from the very beginning:” Sudbury’s Growth Trajectory

The acquisition of the neighbourhood centre is but one of the recent advances in the story of this cluster’s progress. In 2017, Sudbury cluster’s growth was bolstered by the opportunity for a mother and two daughters to participate in a Book 5 campaign held in Waterloo. This space of learning and study alongside collaborators was a catalyst for opening the Flour Mill neighbourhood to the junior youth program and an ensuing pattern of youth studying and serving together in the years to come. A number of subsequent camps and spaces for study lent impetus to the formation of children’s classes, a children’s festival, and an awareness of Sudbury’s role as a reservoir cluster to the Northern Ontario subregion.

Since July of 2020, the Sudbury cluster has more than doubled participation in devotionals and tripled participation of friends of the Faith. The number of study circles in Sudbury has also grown from 12 in September to 21 as of January 2021.

The friends in Sudbury describe the pivotal role of the July 2020 Ontario-wide (revised) Ruhi Book 1 seminar, which brought a renewed understanding of the Institute’s role being to assist all to walk a path of service. After this seminar, seven youth from Flour Mill neighbourhood entered Book 1 and were swiftly accompanied to begin serving as animators. They quickly moved into a weekly pattern of study, action and reflection. This cohort of youth are from Christian, Mormon and Muslim backgrounds, primarily from Tanzania and Nigeria. As the friends in Sudbury reflected on their experience, they described how they are,

“thinking of not planning for them, but with them as part of the team. We really saw them as spiritual giants from the very beginning, and it’s amazing to see that guidance coming to life, now one of them is already animating on his own.”

These developments had further implications for growth. As the youth from Flour Mill began animating, the original animators seized a sliver of opportunity to begin activities in the nearby neighbourhood of Louis Street before winter came.

The new neighbourhood centre has also opened up opportunities to collaborate with like-minded community organizations working in the same neighbourhoods.

“We are learning to find these precious points of unity and see what doors open. In broad strokes, having the centre has increased the number and quality of conversations about the community building process at all levels: between individuals, the community and the institutions, in both Baha’i and local spheres. It’s been a true rallying point.”

The friends in Sudbury have connected with two like-minded organizations in recent months through the growth of the Junior Youth program in the Flour Mill and Louis Street neighbourhoods. One is Shared Harvest, focused on food security and community gardens in Flour Mill. Those working with Shared Harvest were impressed with the connections the junior youth had with those in Flour Mill, allowing both programs to collaborate on innovative community gardening initiatives.

This summer, when the first junior youth group was established in the Louis Street neighbourhood, a resident invited the Baha’is to share the vision of the junior youth program with the local councillor and a number of nonprofits. After an initial email exchange, the councillor and others asked to meet in person, at which time the youth did a presentation describing the aims of the junior youth program. Everyone present was visibly moved by their eloquence and remarked how youth, many of whom had only been engaged in the process for a few months’ time, were able to articulate concepts such as the two-fold moral purpose with depth and clarity. As a result of this presentation, the organization Live Love Louder, an arts-based organization focused on eradicating prejudice through collective visual art projects is now planning a collective mural project with the junior youth to beautify the walls of the new neighbourhood space with murals that express the aims of the program. 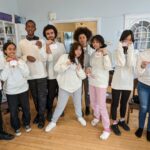 Translating Insights from the National Meeting Into Action at the Grassroots 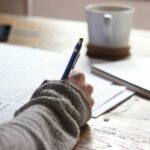 A Tutor Reflects: Robot Competitions and Spiritual Perception in London