Having Conversations with Families in Bayview Mews

A group of families living in the Bayview Mews neighbourhood of Toronto, near Sheppard and Bayview, have been learning for the last 6 years about working with families. In that time, they have begun a children’s class which is now on the precipice of having four concurrent grade levels. For several years, the team has made concerted efforts to meet youth in the neighbourhood, thinking that they would be the ones to help with the younger generation; alongside these efforts, friendships naturally formed with fellow parents. They have had Holy Day celebrations, built a number of deep friendships, and have been consistently reading their reality and learning about having conversations amongst and with parents. As a result of the pandemic, the team has perceived an opening to further explore different approaches to the material and spiritual education of children alongside their neighbours.

“We were asking ourselves what insights we could gain from the patterns of life in our neighbourhood and through working with families. In our neighbourhood, a lot of weight is put on the quality of schooling and families often put their children into a number of extra curricular activities. When we discuss these activities, it is clear that the parents see them as one way in which they can support the development of excellence in their children.

Throughout the time of the pandemic, there’s been an opening to move into a fuller kind of conversation with our neighbours, examining some of the unspoken patterns we all engage in as parents–to really think through what is most important for our children. Of course, we see the importance of the children’s classes in the neighbourhood and the way in which they shape not only the spiritual character of our children but also, over time, the kind of play that is happening in the neighbourhood as a whole. The presence of the classes in the neighbourhood have a lot of implications. Essentially, we’re asking ourselves: how does the rising awareness of the spiritual qualities explored in the children’s classes shape the way that all the kids play together, even without the parents around?

At the same time, we’re also engaging in consultation with other families that isn’t only about the spiritual education of children. Perhaps this is because we have children ourselves, and we’ve also expressed our own concern for their material advancement as well as their spiritual development. We’ve also seen how the class becomes quite meaningful to families. In one case, a child could no longer attend because their karate course was at the same time as the class, and eventually this family moved away. Some time passed and though they were in another neighbourhood, the family reached out to ask if the class was still happening, describing that they hadn’t been able to find anything like it again. This family now regularly drives the child to participate on a weekly basis.

There are many different priorities for parents when they think about the development of their children. But rather than simply doing what’s expected of us as parents from a societal perspective, we’re creating these micro level social structures. We’re beginning to consult more about what we’re doing with our children and what informs those decisions in an exploratory way. We’ve been having a weekly social gathering in the evening on a weekend and a growing group of parents is attending, bringing treats and coffee. This has been a space to have a conversation as well as share more about the courses of the institute and reflect on the dynamic of parenting and the possibilities of supporting one another in our neighbourhood.”

These reflections call to mind the words of the House of Justice:

“As they call on one another in their homes and pay visits to families, friends and acquaintances, they enter into purposeful discussion on themes of spiritual import, deepen their knowledge of the Faith, share Bahá’u’lláh’s message, and welcome increasing numbers to join them in a mighty spiritual enterprise. Aware of the aspirations of the children of the world and their need for spiritual education, they extend their efforts widely to involve ever-growing contingents of participants in classes that become centres of attraction for the young and strengthen the roots of the Faith in society…And with the advantage of a greater abundance of human resources, an increasing number of them are able to express their faith through a rising tide of endeavours that address the needs of humanity in both their spiritual and material dimensions.” 1 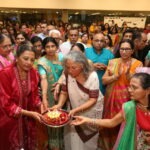 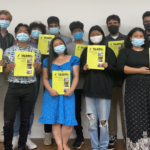