“If not now, when?” Kawartha Lakes Reaches the Second Milestone

A group of friends in the Kawartha Lakes cluster have made an incredible discovery: the untapped potential of a good cup of coffee. As we will see, this much-loved yet unlikely protagonist was the catalyst for what is now an expanding nucleus of friends consulting, reflecting, and acting together on a weekly basis. This January, the friends in the Kawartha Lakes cluster were delighted to recognize that the conditions of achieving the second milestone of growth, an indication of a rise in capacity in their community, had been met.

Over the last few years, the friends in the Kawartha Lakes cluster have been learning about growth alongside other clusters and Institution members, such as the Auxiliary Board Members as well as traveling to Ottawa to learn from a more advanced centre. The beginnings of a nucleus of friends acting within the framework of the Plan was underway.

Through organizing an interfaith devotional, the Bahá’ís were able to develop a friendship with the United Church minister. This led to the minister learning about and then sharing the Junior Youth Spiritual Empowerment Program (JYSEP) with the whole church community. Through working with the youth coordinator at the church, friendships were strengthened and a youth from Peterborough came to co-animate the group with Helen Yazdani, who has been serving as an assistant to the Auxiliary Board. Parallel to this, a few friends began studying Ruhi Book 3: Teaching Children’s Classes, and a children’s class began simultaneously. Alongside these efforts, the generality of the friends were continually engaged with firesides, devotionals, and meaningful conversations with the wider community.

Helen describes a rise in the collective will to reach a new milestone of growth in the cluster:

“There are always those individual feelings of not being able to reach out to many others. But this is something that the House of Justice is asking us to do. We want to be part of that 5000 clusters that achieved the second milestone. And we were given this extra One Year Plan by the House of Justice to do it.”

Indeed, the community’s increased capacity is evident in their well-attended annual summer picnics, the Regional Summer School, Holy Day celebrations, and Unity Feasts held for the wider community. Crucially, the institution of the Local Spiritual Assembly with its outward-looking orientation is a pillar of steadfast support and encouragement for the many courageous individual and collective initiatives of this small but vibrant community.

Jim Hopps and Clint Fraser, two Bahá’í friends, began meeting for coffee at “Corner Bites” before the global pandemic, asking themselves how they might be of service to the community, regularly drawing on guidance from the Universal House of Justice. Enter the bold, yet unlikely protagonist in this cluster’s journey: Coffee! Each week, they thought of others they could invite to join them, and over time, they started playfully calling themselves the ‘Boys Club,’ a fitting name for a group of gentlemen over the age of 60. They’ve continued to meet  and study over Zoom throughout the pandemic, carrying out a regular devotional and are now learning about systematic home visits and the confirmations that come about through taking action.

Rae Munroe describes some of the key learning that has helped them be systematic in their efforts:

“Learning by doing comes to mind. An example of that is that for a number of years we’ve been having reflection meetings. But it wasn’t until January 8th, when we finally decided to have an expansion phase! It was being put off and put off and eventually the Auxiliary Board Member said ‘do you think you’re ready for that?’ And though I had been very hesitant for some time, my answer was ‘well, if not now, when?’”

Helen adds that one element that helped them take this step was a collective realization that an expansion phase didn’t have to look a certain way: they could be creative in designing something that would work in their reality:

“We were thinking, this expansion phase thing is so big, we cannot do it. Typically it’s a two-week period, with dozens of friends involved. But for us, we saw it can look different. It was two or three days and there were nine of us. But it’s about actually starting and praying and consulting together and reflecting on it. And then it will happen.”

In early January, the cluster reflection gathering was characterized by a lively spirit of consultation on plans and possibilities: a real willingness to act in light of the guidance was evident in all the friends. This gathering built on momentum already being generated around multiplying devotional gatherings: the group had already gone from eight to twelve gatherings and then, audaciously set a goal of 25 devotionals. They introduced the concept of the expansion phase, set dates, and rallied the community. Nine friends from the cluster attended the expansion phase, which exceeded their expectations. The participants made lists of home visits, identified possibilities through consultation, then carried out their plans in the afternoon. During the reflection gathering on the following day, five new devotional gatherings had started, bringing the total to 18. A spirit of common purpose and collective endeavour was palpable.

The night before this expansion phase, Rae had a dream that brought him confidence:

“The night before, I had this dream that I was doing home visits. I’m not one that’s done a lot of home visits so in the dream every door I would go to, they weren’t closed, the doors were all open. And in this one place, there were two people in a bed, they were in a home.”

Rae described the feeling of those first home visits as “being a kid on a high diving board and you’re so scared but as soon as you jump, you can’t wait to do it again.” But the full meaning of his dream revealed itself to him a few weeks later.

In late February, after having called a retirement home where they knew two Bahá’ís were living, the conditions of the pandemic finally allowed Rae and Jim to visit. After taking rapid tests, they walked down a corridor to the unit. When they arrived at the door, as they went to knock, the door opened right away, like in Rae’s dream. The couple welcomed them warmly and “lo and behold, the wife was lying down on the couch, because she’d had a bad fall! And I thought ‘I’ve had this dream, and now we are here!’” As they connected with the couple, they realized they could be assisted to participate in the Feast through zoom and that the wife in particular, who is in her late seventies, was eager to study the sequence of courses for the first time in her life. Her husband looks forward to praying with others, noting: “that’s what’s lacking in the community!”

The group also described the importance of drawing on spiritual forces, particularly prayer, to fuel their efforts. Every day, each of them recites the prayer for remover of difficulties and the Fire Tablet. They have also been learning not only about setting goals but also about breaking them down into actionable steps. The group is brimming with new ideas for steps they can take, both individually and collectively. Helen described a gathering of women she connected with through the NextDoor app and Jim described connecting with other families in his condo building and having meaningful conversations.

Jim has also signed up to rent a plot of land nearby to grow vegetables: “Most of the people that have those plots are in that same condominium. And every time I go with my hoe and my rake, we’re talking. I never turn down an opportunity to share the Faith with someone.”

The example of these friends in Kawartha Lakes and their approach to building friendships highlights the description of the Universal House of Justice:

“Through exchanges of this kind, consciousness of spiritual forces is raised, apparent dichotomies yield to unexpected insights, a sense of unity and common calling is fortified, confidence that a better world can be created is strengthened, and a commitment to action becomes manifest. Such distinctive conversations gradually attract ever-larger numbers to take part in a range of community activities. Themes of faith and certitude surface naturally, prompted by the receptivity and experiences of those involved. What is clear, then, is that as the institute process in a cluster gains momentum, the act of teaching comes to assume greater prominence in the lives of the friends.”[1] 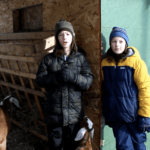 Developing Virtues on a Farm in Martintown 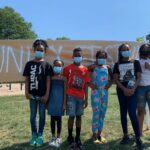