The first global conference in a series of conferences sweeping the province was held in Sudbury in early May. Over 250 people attended, with a handful on the zoom link as well, and art, music, and stories were shared in an atmosphere of friendship and fellowship. The conference was for the grouping of northern clusters, which included Nipissing-Timiskaming, Lakehead-Northshore, Cochrane, Algoma, and Sudbury-Manitoulin, and friends from each cluster attended. Engaging many friends of the Faith and reaching out to all rings of our concentric circles was a big goal of the conference, so the neighbourhood team in Sudbury along with nuclei scattered around the region began to plan and think about how to attain this goal.

With the population of friends of the Faith in the neighbourhood (Flour Mill), the team found a few strategies helped with having entire families attend the conference. Over a month ago, there was a parent gathering at the neighbourhood centre which 30 people attended, viewing a short video about the global conferences. This helped to identify protagonists among the parents, and one parent in particular brought at least three other families to the conference alongside her own.

Another strategy for the Flour Mill friends was to see every single junior youth and youth as a protagonist. One day they all met at the center and the team went over some salient points of the conference, keeping it light while highlighting the profound implications of the concepts to be explored together at the conference. The junior youth went out into the field with flyers in hand and the “who, what, where, when, and why’s” of the conference in their mind. Accompanied by their animators, each parent was visited, engaged in a conversation, and given a flyer. The basis of the conversation was this: the junior youth were inviting them to a global conference where everyone from the community can come together and really dive deeply into the needs and strengths of their respective communities in light of the principles of the oneness of humanity and our purpose to contribute to the betterment of our world.

After this step was taken, there were countless follow up conversations leading all the way up to the day before the conference itself. These conversations deepened the participants’ knowledge of two particular themes: Bahá’u’lláh’s vision for humanity and building vibrant communities.

Beyond the neighbourhood team labouring in the Flour Mill was an entire community of believers around the North that were thinking about how to extend an invitation to everyone in their own individual concentric circles. Collectively they set a goal of 240 attendants, and by the time of the conference it is estimated that over 1000 total conversations occurred. The community also joined in a collective prayer campaign in the two weeks leading up to the conference, reciting the Tablet of Ahmad daily.

The conference itself took place over two days. The first day was planned with the over 75% of attendants who were from the wider community in mind, which allowed the conversation to focus on the communities they came from. In the morning plenary session, junior youth from the Flour Mill presented on concepts of spiritual and material progress, and the need for both in our individual lives and our communities. This presentation set the tone for the entire conference. At the beginning of every plenary, a theme song was shared: “Ye are the fruits of one tree and the leaves of one branch. Deal ye one with another with the utmost love and harmony, with friendship and fellowship.” By the end of the conference, 250 people of all different backgrounds were singing together “with friendship and fellowship” and waving their arms in the air. It was truly an atmosphere of love and joy.

There were two breakout sessions throughout the day. There was a team of wonderful volunteer animators and children’s class teachers that ran the six groups of kids so that the youth of that locality could participate in their own breakout group. There were two main themes explored in the morning breakout: “Bahá’u’lláh’s vision for humanity” and “Building Vibrant Communities” and two more in the afternoon: “Educational Endeavours and the Institute” and “Social Action”. There were seven adult breakouts including an Arabic language group, a French language group, and a group with parents of young children.

Facilitators described the insights shared by the parents whose children were involved in the educational activities of the institute. They shared in the most glowing terms how they noticed true transformation in their children and related this directly to the influence of the program in the neighbourhood. They see them willing to help out more and serve their families, and quarreling less with their siblings and classmates.

The conference was infused heavily with the arts. Not only was there music in every plenary, but there was a giant collective mural activity organized in collaboration with a nonprofit organization called “Live Love Louder”. The design for the mural was created through thorough consultation and reflection on the concepts and themes that would be explored in the conference. The images and symbols within the mural were carefully chosen to reflect the vision of Bahá’u’lláh and the work of vibrant community building. Live Love Louder collected colourful photos from people both in the conference and outside the conference and are assembling them into a poster with the quote: “Let your vision be world embracing” on it. This poster is set to go up in the Ryan Heights neighbourhood. The arts were also shown in the junior youth and children presentations where, at the end of the day, they performed songs, poems, artistic renditions of their vibrant communities, a skit about kindness and even a dance.

In the final plenary, the parents shared many keen insights. “As we learn to join the Bahá’í Faith and grow in that Faith we also look at spaces for devotions and we realize that we have a Centre that is always open.  We also realize that we can fellowship in our living room and continue to share the fellowship according to the Bahá’í principles or what is expected of us to make our community vibrant.” This was the reflection from one parent, but similar sentiments were shared from all, and a broadening of consciousness about the important work the Bahá’ís are doing and a willingness to arise and join the efforts was seen in almost every parent.

Confirmations came flooding in the day of the conference, which reminds us to make a mighty effort and then trust that God will help us. One person had invited his friend to the conference weeks in advance, but the friend showed little interest. The morning of the conference he texted him and the friend showed up. This friend ended up leading the presentation of an adult breakout group and even invited his wife for the second half of the day. One parent visiting from Tanzania approached an organizer and said: “We need this in our country. Can you connect me to the Bahá’ís there?”. A girl from the children’s class in the neighbourhood asked for 23 flyers to give to her classmates and teachers. At the start of the Arabic breakout group, the first question asked was “Who is Bahá’u’lláh?”. After the explanation, this group consulted amongst themselves about the need for these concepts in their community and gave an eloquent presentation on the importance of spiritual education in their neighbourhoods. On the second day, a youth who had previously been involved in activities in Thunder Bay, and had driven 12 hours from Thunder Bay to participate in the conference celebrated her decision to formally enroll as a Baha’i by offering an Indigenous fancy shawl dance. This youth is now in the process of establishing a children’s class in her neighbourhood.

This giant undertaking could not have been done without the assistance of 17 volunteers from outside the region. A group of four youth from Oakville in grades 11 and 12 took a two hour train ride and a four hour car ride just to help animate the junior youth groups during the conference. There was also a dedicated planning team for the conference from the North that met every week and planned the study materials, logistics of the location, everything down to the name tags. This conference was a point around which all the communities of the North could unite.

Participants left the conference not only infused with joy and fellowship, but with some concrete action steps in order to bring Bahá’u’llah’s vision for humanity to their very own communities. The conference acted as a giant catalyst to individual initiative and collective action and plans for future conferences in the North to reach more friends are already underway.

“How could we offer something without leaving our homes?” Dawn Prayers in Stratford 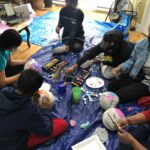 Humbly Learning About Contributing to Discourses of Society