“You Could Feel the Warmth!” Studying New Guidance in Springdale, Brampton

The team in Springdale, Brampton came together the day the December 30th message from the Universal House of Justice was shared. One friend serving in the neighbourhood describes their experience:

“I’ve seen the strengthening connection between the team of tutors here and the House of Justice. There isn’t a hesitancy to come together to study messages when we get access to them. Whenever we say we’re going to study a letter, it’s greeted with excitement. Naturally when we heard that the letter was coming out, we arranged a time to gather and study it. This initial study included about 14 of us, the team of coordinators, tutors and collaborators.

Because of the restrictions around Covid, we can only have ten people indoors of the neighbourhood centre at a time, so any time there are going to be more of us, we either gather in the garage space, or some will join online. This led to an interesting situation that night because the excitement to study was palpable, and because it was very cold out, people were asking: “Should I come in person? How many are coming?” As people arrived, we knew we would have to do rapid tests for everyone to gather indoors, which would mean that our supply of tests would be too low for other upcoming activities. As a group, we collectively decided we could endure the cold in the garage, grab blankets and have tea. It wasn’t worth it for us to blow through the supply of tests just for us to be warm. “The words of the House of Justice will keep us warm! Well at least our hearts,” shared one of the youth. And so we began our study that lasted about 2 hours until we were really too cold to consult or continue our study. The group decided to gather again the next day and finish reading the letter.

We know that the Faith is an all embracing one, but I was struck by how clearly it’s laid out in this letter. In the neighbourhood, we’ve seen people interact with the Revelation and see and develop their own identity through the Faith. We’ve had youth who’ve declared their Faith over the last two years here, as part of the process, so when we read it together, there were a few of them who paused and then said: “wow, it’s like they just described my life over the last decade. I was encouraged to study, to serve and to go through these steps that have been described here and they wrote it all out here in a paragraph for the world to see!” All the youth that declared their Faith said this, not just one. They were amazed that the House of Justice can resonate and connect with so many diverse people who have such a variety of paces and strides in interacting with the Revelation.

The study of the letter happened the evening of the end of the winter junior youth camp. One youth from the neighbourhood who is animating and supporting coordination around the programme, had come from the camp with his younger sister, a junior youth in the program. She was given the option to stay and study the letter, or get picked up by their parents. She asked what the letter was about, giving the group the opportunity to explain it clearly and directly. She decided to stay with the group. Although she was quite quiet during the study, she later mentioned that she was happy she got to stay.  She shared that, “My brother and the animators and tutors have mentioned the House of Justice before but I didn’t know they wrote letters. And the letter actually felt like they were talking to me even though they do use a lot of big words!” In the study itself, the group was characterized by an outward-looking orientation, pausing to ask, for instance, whether it would be helpful to describe the three milestones and the unfoldment of the series of the Plans. You could see how the institute facilitated conversations that helped deepen understanding around the history of the Faith and connect it to the work we were all carrying out in our neighbourhoods today. We knew we had to think of creative ways to share the letter broadly. The group spent time thinking of how every child, junior youth, youth and family gain access to the guidance in the coming months.

The spirit of seeing how each individual could have access to the letter inspired the mode of operation during the neighbourhood’s current expansion phase. Reflecting on the request made by the National Spiritual Assembly in June 2021 asking communities “… might we aim in this one year to double once more?”, the team saw that it would require the contributions of every child, junior youth, youth and family to look at their natural circle of friends and invite them to walk on this path of service together. The children’s class team created a booklet for the children to connect their efforts to the counsel of the Universal House of Justice as they thought of friends they could invite. This booklet is available in pdf form in the Resource Centre. During the planning space, one teacher shared, “The Universal House of Justice has written to the children too, not just us. In nine years, some of these children will be the youth and junior youth of this neighbourhood. They will be studying this letter in great depth. Hopefully this booklet is just the start of their many studies to come.”

No doubt, over the coming weeks, months and years, groups of friends across Ontario will continue to gather and gain fresh insights from this outpouring of guidance, in light of ongoing action and reflection in their communities. 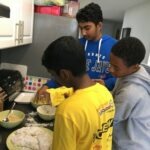 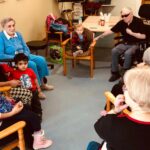